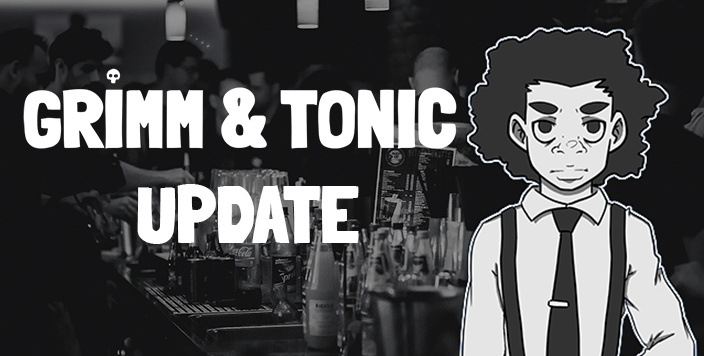 So it's officially been two weeks since Grimm & Tonic launched and the reception so far has been decent, straightforward and most importantly, fair. Research and feedback primed me to not expect anything too great in terms of reception.  This was based on the amount of content that is currently available in game as well as the nature of Steam at the moment. Despite this, I'm gratified by the positive responses the game has received so far.  Thanks, truly.

Grimm & Tonic was always to be an exploration in interactive fiction. It is an attempt to merge the sequential nature of webcomics with the interactive nature of video games. As I pivot away from the initial paradigm of weekly web releases.  I feel that Early Access is the next best fit, to carry this design ethos forward. For the foreseeable future, you can expect weekly updates in the form of tweaks, additionally endings, unlockable side stories and teasers for upcoming episodes. It is my hope that with your feedback, Grimm & Tonic will grow into a more coherent product with less rough edges. So keep the feedback coming.

This week's update introduces the very first B-Side Story: Glass Half Full. These stories are intended to be short (approximately 5- 10 mins long), with no choices, and focused on one or two characters. The idea is to use these stories to flesh out the cast and reframe events that occur in the episodes from their unique viewpoints.  They will be unlockable via your actions in a given episode. (HINT: Glass Half Full is about Saul and his cat)

Additionally, for this week I wanted to incorporate a few achievements alongside a third ending for Episode 1. Unfortunately, my current production cycle seems to be too ambitious and it might be better to have a weekly sprint dedicated to each of these items (Achievements and Additional Endings) respectively.

Let me know what you think!

All the best,
Spritewrench.